Magnetic field is a region around a magnet where magnetic influence is experienced or felt. It is  also a region where it exerts force on other magnets. It is a vector quantity.

Properties of Magnetic Lines of Force

(i) They originate from the N-pole and end in the S-pole. ii. Two magnetic lines of force do not cross each other.

Magnetic field intensity at a point in a magnetic field is defined as the force experienced per unit N -pole placed at that point.

Magnetic potential at a point is the work done in moving a unit N-pole from infinity to that point.

2. Attraction between unlike poles: 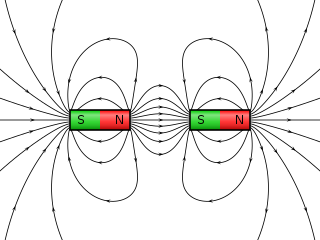 4. Earth’s magnetic field acts at a certain angle to the horizontal.

5. A neutral point NP is defined as a point at which the resultant magnetic flux density is zero.

At this point, no magnetic influence is felt.

EVALUATION (POST YOUR ANSWERS USING THE QUESTION BOX BELOW FOR EVALUATION AND DISCUSSION):

Case I: Two parallel current-carrying conductors with current in opposite directions

Here, a repulsive force is created between the two conductors because the magnetic field moves  towards the same direction. Hence, they tend to move away from each other.

Here, an attractive force is created between the two conductors because the magnetic field moves  towards different directions. Hence, they tend to move towards each other. This is why you see  sticks attached to the PHCN 240V lines in our streets, which prevent the conductors from moving  towards each other.

Magnetic Field Due to Current in a Solenoid

A solenoid is a long insulated cylindrical coil. The field produced outside a solenoid is similar to that of the field produced by a bar magnet but the field is straight in the middle of the solenoid. The end where the direction of the current appears anti-clockwise behaves like the N-pole, while the end where the current’s direction appears clockwise behaves like the S-pole.

Magnetic field due to current in a solenoid

EVALUATION (POST YOUR ANSWERS USING THE QUESTION BOX BELOW FOR EVALUATION AND DISCUSSION):